The Basics of Penetration Testing

Cybersecurity is a critical investment for companies today. As the adage goes, threat actors only have to be right once – and cybersecurity teams have to be right every time. With zero-day exploits, ransomware-as-a-service, and advanced persistent threats, there are more ways than ever to breach networks, and security operations teams are slammed. Security analysts monitor the network to ensure events and incidents are investigated and stopped before expensive breaches impact the organization’s bottom line. Every minute in the SOC counts, and every security investment matters when it comes to mitigating critical security risks.

What can Technology leaders do to shore up defenses proactively for security operations?

A proactive penetration testing strategy – preferably streamlined with one qualified penetration as a service (PTaaS) provider – is a strong risk reduction mechanism that can be measured in shorter Mean Times to Discovery (MTTD) and Mean Times to Remediate (MTTR).

But what does that mean? In this blog, we’ll cover the basics of pentesting, how pentests help validate security and establish compliance readiness, and how pentesting helps ensure applications do not cause preventative, unnecessary breach impacts for security operations.

What is Penetration Testing?

Penetration Testing is a type of security testing in which highly skilled human hackers are hired to identify and exploit vulnerabilities in a digital environment. The digital environment may include a Web Application, Network, or any other type of digital asset.

Why do we use Penetration Testing?

Security leaders depend on penetration testing services for several security validation purposes that include building customers’ trust, passing vendor assessments, fulfilling contractual obligations, and obtaining security certificates. The overall idea of any use-case for Penetration Testing that falls under the Security Validation umbrella is to confirm that security controls are effective to both internal leadership and outside stakeholders.

What are the 3 types of Penetration Testing?

Black Box, Gray Box, and White Box are the three types of Penetration Tests. Each pentest type can be differentiated by the level or amount of information that the recipient provides to a human hacker before their pentest.

To break it down, here are their classifications: 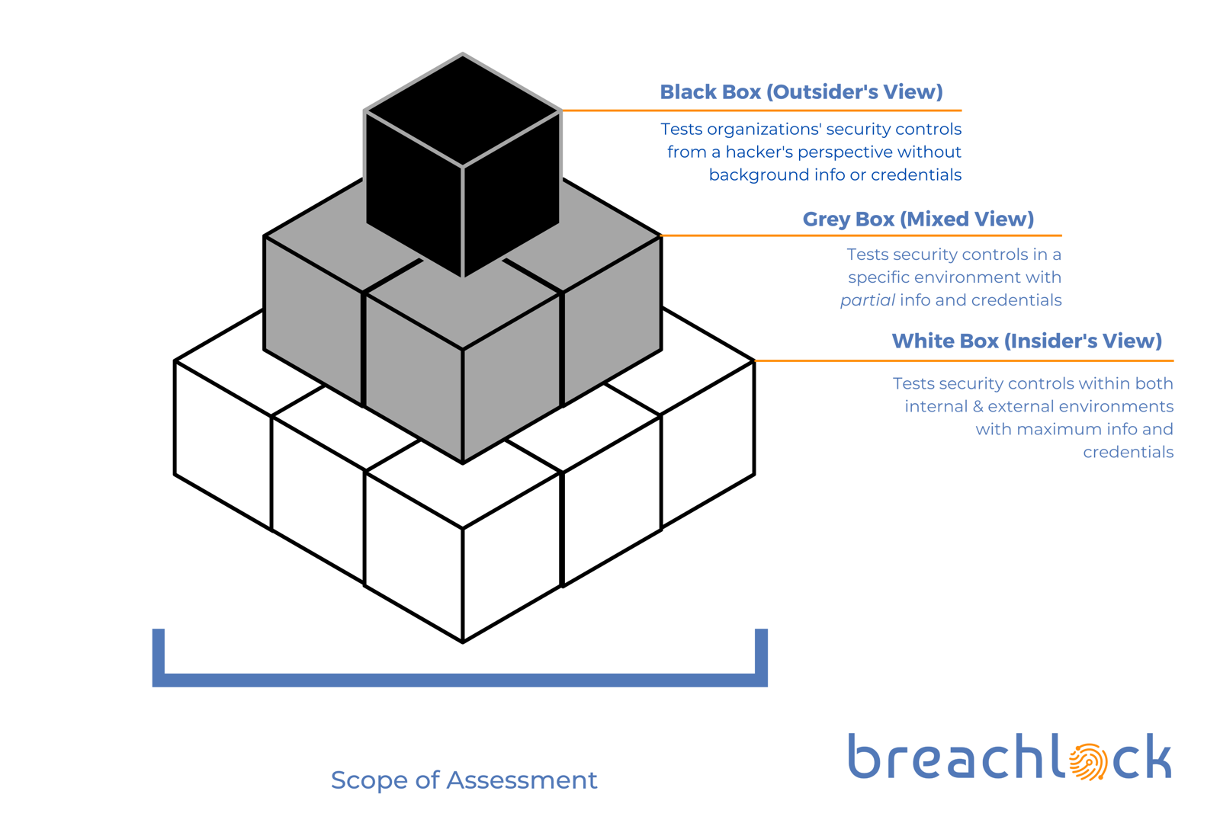 How is Penetration Testing done?

The process of any penetration test can be defined with four simple steps:

It is important to always begin with the end-goal in mind before determining the scope of a pen test. Think about it – no organization is going to invest time and money into a penetration test with no objective in place. Every step of the penetration testing process should stem from the desired outcome.
The reality is that every organization has varying motivations for getting a Pentest done, and the scope of penetration tests motivated by compliance will be drastically different than those motivated by security validation objectives. For example, organizations who are simply motivated by obtaining a specific compliance are more likely to have a narrower scope, such as an individual web application or network, and companies motivated by security validation are more likely to desire a broader overview of the security posture of their entire attack surface.

Penetration tests are executed with specific methodology by highly skilled penetration testers (AKA ethical hackers). Thanks to organizations that have laid out a roadmap for testing for known vulnerabilities like Open Web Application Security Project (OWASP) and National Institute for Standards and Technology (NIST), penetration testers have much of their methodology defined for them before they even begin.
The best Penetration Testing providers are careful to fully utilize the skill and creativity of human hackers by using automation and AI to identify older known vulnerabilities, freeing up the technical practitioners to instead focus on hidden vulnerabilities that technology alone would miss.
Human talent is the costliest resource in the cybersecurity industry, and penetration testing providers that invest in maximizing automation for their testers have an advantage over other options. Human hackers bring value when their time isn’t allocated to manual techniques that could be automated, and/or drafting and formatting reports.

Remediation is the process of patching any vulnerabilities that could otherwise be exploited during a cyber-attack if left unpatched. Although remediation was once a time-consuming and tedious process, there are now ways to diminish remediation timelines. Modern and innovative Penetration Testing providers provide detailed, evidence-backed reports with proof-of-concept, screenshots, and specific recommendations to follow during remediation. The less time that a DevOps team or system administrator spends remediating vulnerabilities, the more time that can be spent on revenue-generating projects. Remediating the exploitable vulnerabilities that are discovered during a penetration test is the goal of a penetration testing engagement.

Once remediation is complete and all exploitable vulnerabilities have been patched, a retest is initiated. The goal of a retest is to confirm with 100% confidence that the patches implemented during remediation are effective in eliminating the exploitability of any vulnerabilities that were detected. Retesting gives security leaders peace of mind that their customers’ data and their systems are secure and that the report is ready for compliance auditing. Make sure to ask your penetration testing provider if a retest is included in the cost of your penetration test. Retesting is often what causes ‘scope creep,’ as not all penetration testing vendors will retest after the initial finding’s remediation activities are completed. Typically, recommended remediations must be completed before the penetration testing report is ready for auditors, customers, or third-party vendor assessors.

Penetration Testing can be Simple

Spend Less and Save Time with PTaaS from BreachLock

Penetration Testing as a Service from BreachLock offers an effective and efficient risk management solution to significantly minimize the impact of a cybersecurity breach with a lower total cost of ownership (TCO) compared to other penetration testing vendors and alternatives. With BreachLock’s world-class team of in-house ethical hackers and advanced penetration testing technology, you get consistent findings faster and have remediation integrated into the penetration testing lifecycle. This way, you can focus on your business goals without worrying about data breaches.
Start your PTaaS journey with BreachLock and gain efficiency right away:

Contact us today for a Penetration Testing as a Service discovery call with one of our security experts who can assess your specific needs. We’ll be happy to provide you with a proposal outlining our services. In 24 hours, your first penetration test can begin. Partner with BreachLock today!