Running some random static tests on the code is the first step to detect different vulnerabilities that can put the security of the code at risk. Still, once the web application is deployed, it will be exposed to some new category of possible attacks, such as code injection vulnerabilities or broken authentication flaws. This is where Dynamic Application Security Testing (DAST) comes into place. It is a security testing process which uses penetration testing techniques on the applications while they are running. It takes place once the applications are in production.

It is a process of testing an application or software product in its running state. DAST comes into play when an application has gone into production or entered runtime, after initial development phases.

It is a black-box security testing technique in which the application is being tested without exposing the source code or the application architecture. In this way, it can cast a spotlight on the runtime issues which cannot be easily identified during a static analysis ­ like the authentication and server configuration issues, as well as issues or vulnerabilities which is detected only when a known user logs into the portal.

DAST tools use to run on the operating code to detect issues within the interfaces, requests, responses, scripting, data injection, sessions, authentication, and much more. It does this by employing fault injection techniques on the app, such as inserting different malicious data to the software, to identify various common security vulnerabilities; such as SQL injection and cross-­site scripting.

DAST can also cast a spotlight in runtime problems that can’t be identified by static analysis­­ for example, authentication and server configuration issues, as well as flaws visible only when a known user logs in.

As the name implies, the dynamic testing focuses mainly on the active or runtime features of the application. Some of them are discussed below: 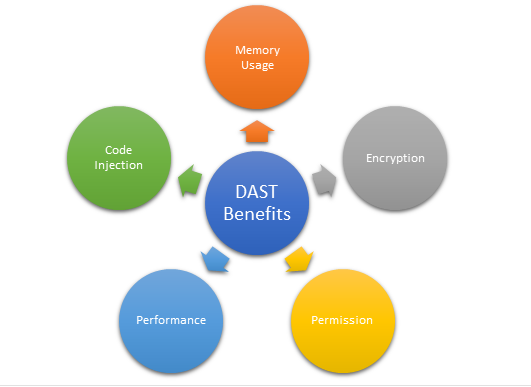 I.  Memory Usage: During static analysis (SAST) of an application, it does not provide any information or test cases on how memory is being used and managed in an application. Whereas in the dynamic testing (DAST), it will help in detecting the different portions of RAM, which can easily be exploited.  While testing using the DAST methodology, executing different payloads in a database or website, it will directly try to execute them into the memory. This will help in checking the memory consumption, i.e. it will directly execute the payload to the CPU and RAM memory. This way DAST directly helps in testing the memory usage getting exploited or not.

II. Encryption: Many emerging federal regulations and as per the industry standards, requires the use of encryption algorithm in your application to protect confidential or sensitive information the user data and safeguarding critical application processes. In DAST, instead of checking the powerful encryption algorithm in use, it tries to break through the encryption technique used and thereby test the possible impact on the business operations if any attackers can get through it. Like in the APIs, there are different encryption methods in use for the authentication mechanism. The DAST technology follows the way which is used by an attacker that is more focused to directly breaking or bypassing the encryption mechanism used.

III. Permission: Dynamic testing can test if the user has the authority to access different allowed resources or by using some malicious code interacting with the application and gaining access as a superuser on the rooted device. There is no way to figure out this security scenario using Static testing, whereas dynamic testing helps in detecting this. When there is a vulnerable plugin in a web application, which on successful execution, results in gaining access to a higher level privileged user. To test such scenarios, DAST will be beneficial as it helps it in testing the live web application, whereas SAST will not able to detect it, as it focusses on scanning the source code of the web application.

V. Code Injection: The backend security of an application is an essential part of an overall security strategy. There are different scenarios in which the attackers can hijack the authentication and authorization tokens; exploit the implicit trust which the backend has while communicating with the application. These scenarios come under the domain of dynamic application security testing. The different test cases here which can be used is testing the vulnerabilities like cross-site scripting, SQL injection, etc. We can get the session cookies for the user using different payloads which we can replay to get the user access.

There are many other benefits as well with dynamic security testing; some of them are as follows: